is a port city located at the Baltic Sea with the population of 245,000 citizens.
It’s nearly hundred years old. It’s one of the youngest and most modern cities in Poland.

Together with Gdansk and Sopot it creates an urban agglomeration Tricity with a total population of 750,000 citizens, which makes it a main urban centre in northern Poland.

The strategic location at the intersection of important international transport corridors
coming from Scandinavia and Northern-Eastern Europe to Southern Europe and the Mediterranean Sea is one of the greatest assets of the City.

Gdynia is one of the most important ports and railway junctions in Poland. Therefore, the City has an excellent accessibility:

Gdynia has unique natural and environmental conditions, as well as a beach in the city centre and an exceptional waterfront on a European scale.

Out of 1000 Gdynia citizens in the working age 302 are self-employed. It exceeds the average by 100 in Poland as a whole. Citizens of Gdynia are professionally active. The unemployment rate in Gdynia stands at 3.4%, which is one of the lowest rates in the country (as reported at 31th November 2020).

City Centre of Gdynia is declared a Polish Historical Monument and registered on the Tentative List of World Heritage UNESCO. You can look closer at its unique modern architecture by following sightseeing routes of Gdynia Modernism Route.

According to studies, Gdynia is the highest rated city in Poland as a place to live. 90% of the citizens are happy about living there.

Located near the sea, Gdynia is also a very green place. As much as 46% of its administrative area consists of forests.

The Polish Film Festival is one of the oldest film events in Europe. It promotes the Polish cinema on a large scale. The Festival has been organised since 1974, initially in Gdansk, and since 1987 in Gdynia. Every year in September, the Festival audience has a chance to watch the latest and most important Polish film productions, mostly premieres, competing in three competition sections, and to meet the filmmakers and film enthusiasts, enjoying the festival atmosphere in late summer by the sea.
The best full-length films selected from among year-round film productions compete for the statuettes of Golden and Silver Lions in the Main Competition. The Short Film Competition is open to shorts of Polish film schools and numerous film producers. The Microbudget Film Competition summarises the results of the Polish Film Institute grant programme for debuts in this category.
The Festival programme comprises also out-of-competition sections, including Pure Classics, which is a review of digitally reconstructed outstanding Polish films, as well as the latest international co-productions made with significant participation of Polish filmmakers, presented in “Polonica” section. Gdynia for Children section gathers young audience of Polish film.
Polish Film Festival offers also numerous industry meetings, conferences and presentations held as part of Gdynia Industry. Polish Filmmakers Association Forum will discuss the Festival’s future by inviting filmmaking community representatives to talk about the future of the event. The audience will also have a chance to take part in many debates held by the Polish Film Institute, Film Women, Directors Guild of Poland, Polish Producers Alliance (KIPA). The Festival programme will also include the School Film Archive workshops and Legal Culture activities promoting fair attitude towards artists.
For years, the heart of the Festival has been the Musical Theatre in Gdynia together with the nearby Gdynia Film Centre. This is where the official screenings of the Main Competition films, meetings with the filmmakers as well as screenings and press conferences are held. Since 2019, the Main Cinema for wide audience has been Helios, a multi-room cinema in the Riviera Shopping Centre. It is also where audience can attend meetings with filmmakers competing in the Main Competition.

Festival audience and film enthusiasts, Tricity residents and tourists like to participate in accompanying events, including promotion of books on cinema. The Grunwaldzki Square, between the Musical Theatre and the Gdynia Film Centre is the location for open air screenings, exhibitions on film, film music concerts and many other attractions prepared by Festival Partners. 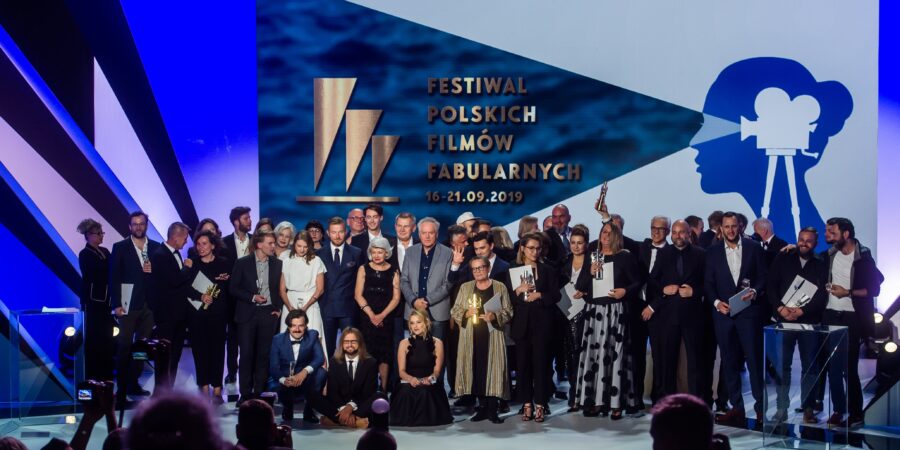 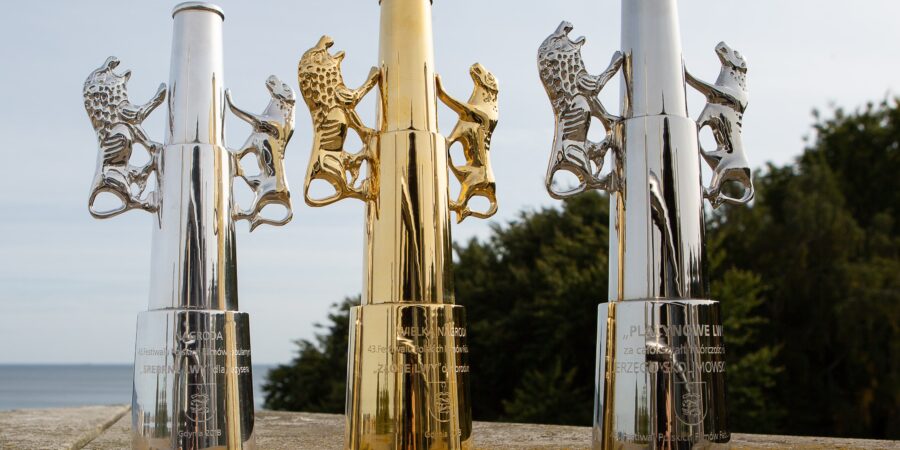 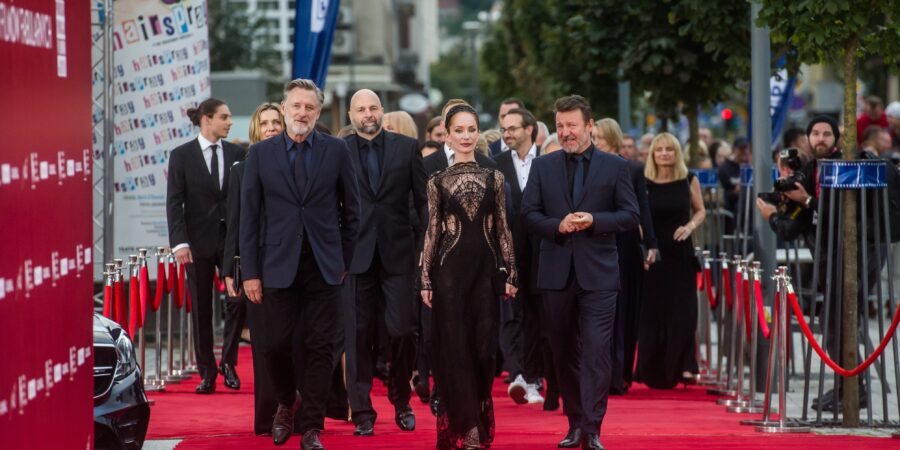 The best films from Poland and abroad, exhibitions, discussions with artists, film workshops. Everything is right here. The Gdynia Film Centre, opened in September 2015, is an important cultural meeting place in the heart of Gdynia. It provides locals and tourists with top-tier film education, culture and entertainment.

The Gdynia Film Centre houses the Gdynia Film School and the Pomeranian Film Foundation in Gdynia – the producer of the Polish Film Festival. There is an Arthouse Cinema, open seven days a week, throughout the year. The GFC cinema has three screening rooms named after the old, defunct cinemas of Gdynia. The largest, Warszawa, seats 277. The two cosier screening rooms, Goplana and Morskie Oko, seat 96 and 45 respectively. They are all equipped with 4K projectors and 7.1 sound.
The GFC Arthouse Cinema cooperates with the Arthouse Cinemas Network and with Europa Cinemas. Its repertoire includes a dozen screenings a day, with new premieres every Friday. The cinema shows many European and international film productions, including arthouse films and many documentaries. In principle the GFC Arthouse Cinema screens all Polish films. Being a co-host of the Polish Film Festival brings great responsibility!

The Gdynia Film Centre also houses the GFC Gallery/Bookshop showcasing the works of emerging artists as well as acclaimed figures of cinema and fine arts. There is also a restaurant and a cafe.

The Gdynia Film Centre is situated in the heart of the city, a few hundred meters from the central beach. Artistic events—outdoor film screenings, concerts, and meetings—also take place on the grassy Grunwaldzki Square and near the acoustical shell. A funicular railway connects the square to the observation deck on Kamienna Góra. There is also an underground parking. The GFC building, with its characteristic form and glass facade, has been designed by ARCH-DECO architectural design studio from Gdynia. It was awarded the best architectural concept of the year title in Eurobuild Awards 2015. 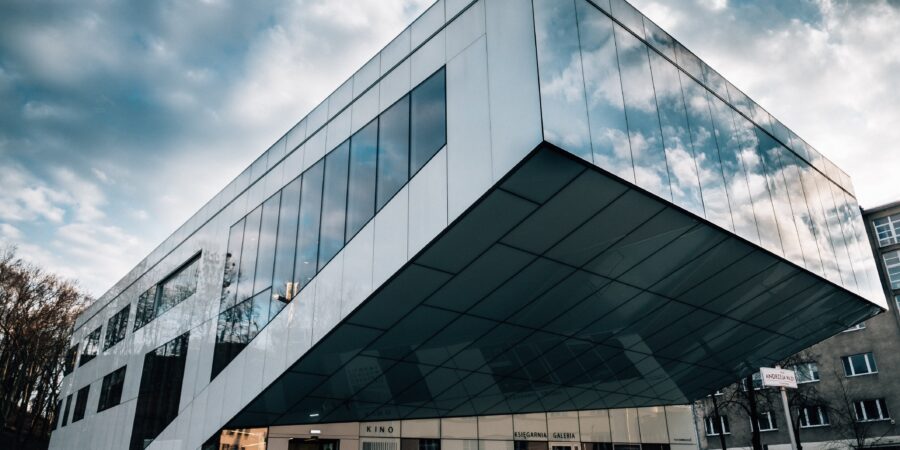 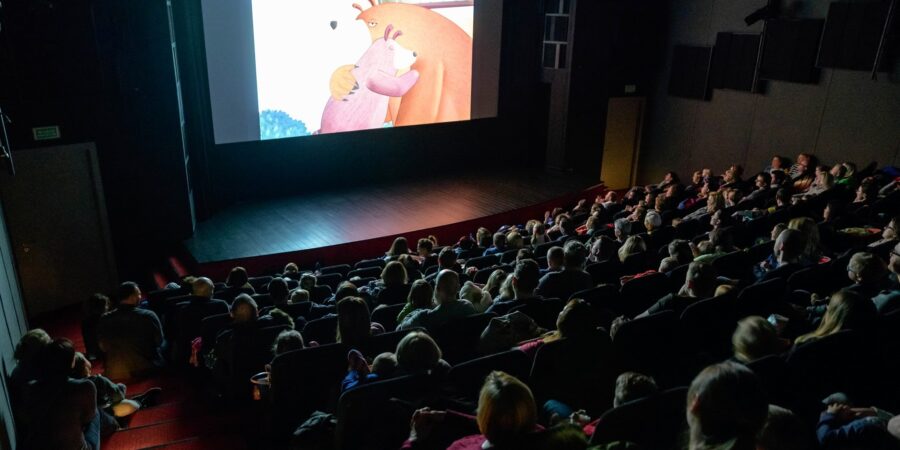 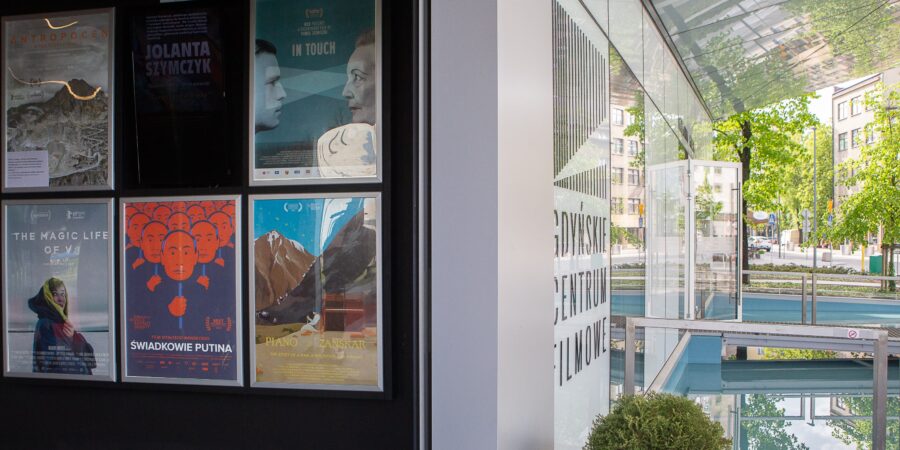 The Gdynia Film School was founded in 2010 at the initiative of Wojciech Szczurek – the Mayor of Gdynia, Leszek Kopeć – the Director of the Polish Film Festival in Gdynia, Robert Gliński – a film director and Jerzy Rados – the originator and the executor of the Pomeranian Film Workshops.

The mission and primary objective of GFS is a reliable, thorough and professional education of new directors of feature films and documentaries, aware of their profession. Teaching major subjects is based on practical classes. Necessary theoretical lectures provide a starting point for a series of classes, workshop rehearsals and realisation of scenes and film shorts. Classes in small groups enable individual work and direct, content-related contact with a lecturer.
The staff comprises feature film and documentary filmmakers, editors, screenwriter, cinematographers, mise en scene and working with actors specialists, and film theorists.

The Gdynia Film School is located in the Gdynia Film Centre, in the heart of Gdynia. The building hosts: 3 screening rooms of the Arthouse Cinema, a cafe, a gallery, a multimedia store, office of the Polish Film Festival in Gdynia and the seat of the Pomeranian Film Foundation in Gdynia. The GFS students have access to lecture rooms and rooms for practical classes, including a film studio, photography and editing studios and a library.
The school uses its own film, lighting and sound equipment. 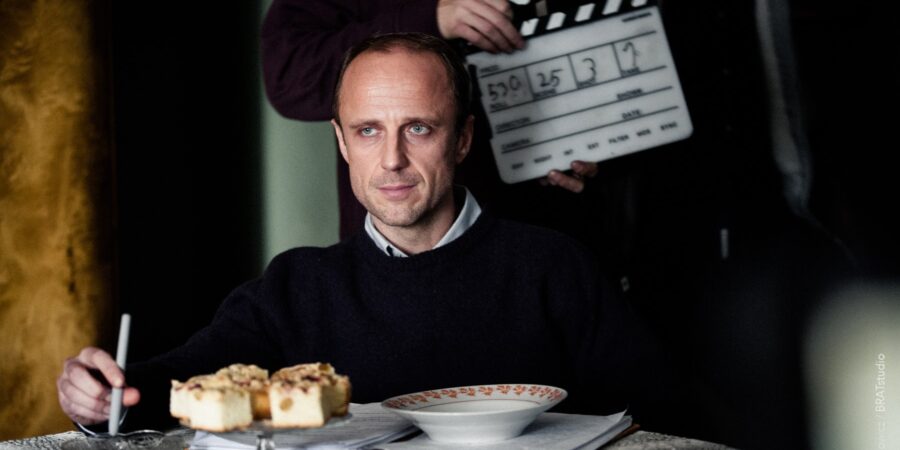 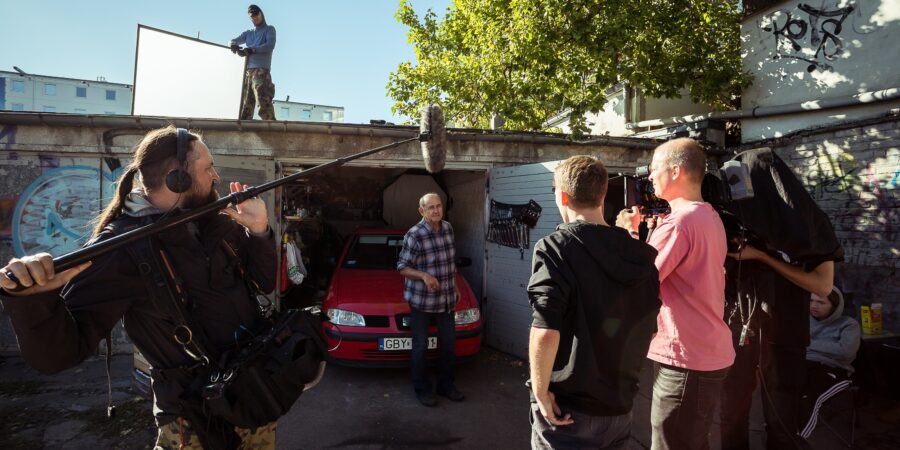 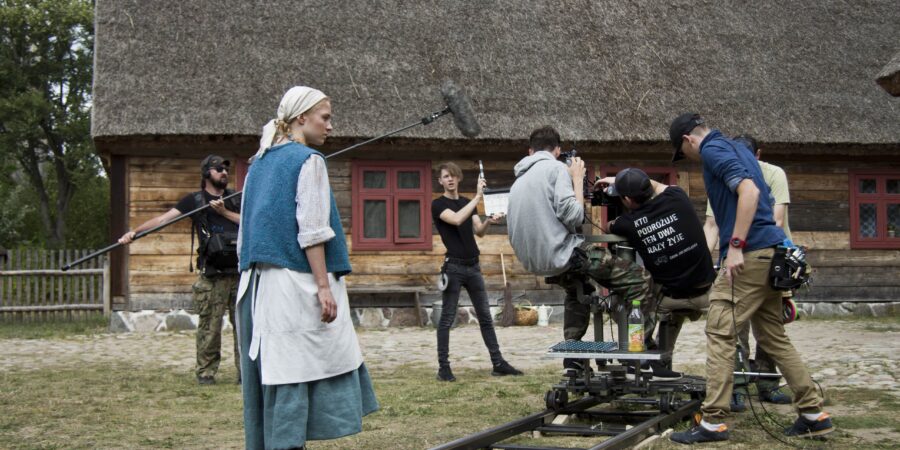 The Millennium Docs Against Gravity is the biggest international film festival in Poland. 2020 saw its first hybrid edition, which attracted a total of 170 700 attendees: in cinemas and on VOD platform. It is the only film festival in Europe held simultaneously in seven Polish cities: Warsaw, Gdynia, Wroclaw, Katowice, Poznan, Lublin and Bydgoszcz.

In 2021, during its 18th edition, the Festival will repeat the hybrid formula. The cinema section will take place from 3rd to 12th September 2021, the online section will take place from 16th September to 3rd October 2021. As always, the programme will be filled with films that touch upon the most pressing issues of the contemporary world. Every year, the audience have a chance to watch films about politics, society, human rights, women’s issues, ecology, psychology, science, philosophy, engaged journalism, sport, art, pop culture, and architecture.
In 2009, the Festival received the prestigious Polish Film Institute award for “the most important international film event” in Poland. In 2013, Millennium Docs Against Gravity received its second nomination to this award. Millennium Docs Against Gravity made watching documentaries fashionable in Poland. The methodically developed, appealing programming of the festival attracts growing numbers of attendees.

In December 2020, the Festival launched a permanent VOD platform: vod.mdag.pl, which hosts the best documentaries from the previous editions of Millennium Docs Against Gravity as well as art-house features. Thus, the Festival throughout the year is constantly carrying out its goals: popularising film culture, educating about documentary filmmaking, and, most importantly, reaching the widest possible audience with interesting, moving, and wise stories. 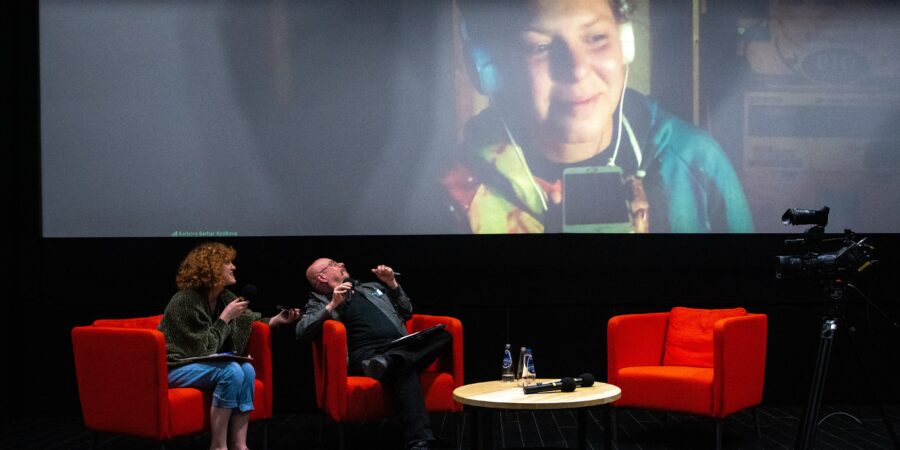 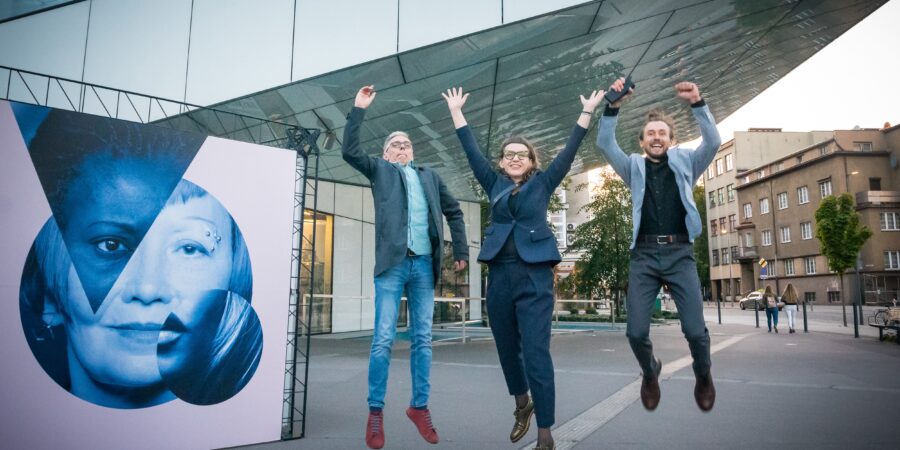 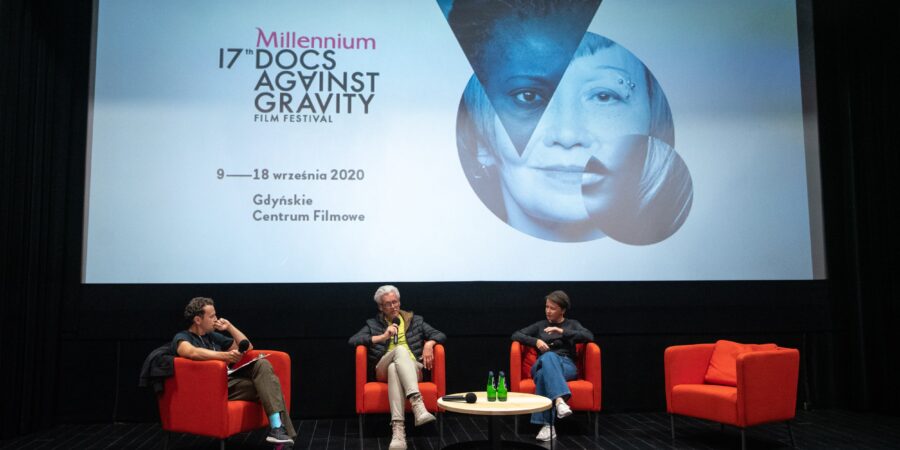 Gdynia Film Fund was created in 2008. Since 2020, it has been run by the autonomous cultural institution Gdynia Film Centre. The mission of the fund is to support, both financially and organisationally, the production of feature films, documentaries and animated films. To receive financial support, the creators or producers, film characters and specified locations have to participate in popularising the image of the City of Gdynia in modern, historical, or marine aspects, emphasizing on the city’s landscape qualities, as well as films which can positively affect the economics of the local market. In the years 2009-2019 GFF funded films with a total amount of PLN 5,872,761. The most important productions that were made were, i.a.: Black Thursday. Janek Wiśniewski Fell, directed by A. Krauze, The Butler by F. Bajon, The Beksińskis. A Sound and Picture Album by M. Borchardt and Solid Gold by J. Bromski. 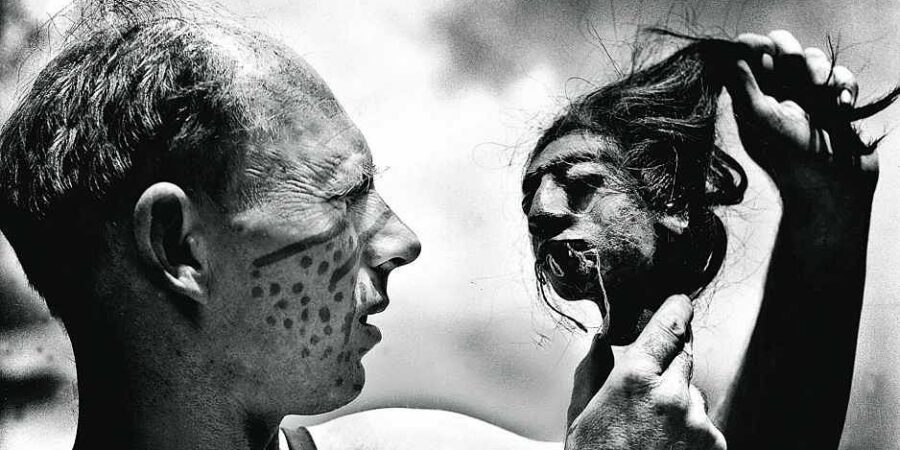 KAZstudio SA (formerly Studio Trefl SA) was founded in 2013 in Gdynia. The studio specialises in traditional stop motion animation with the use of set decoration and hand-made dolls (characters). To this day, the studio has produced 77 episodes of a popular television series The Treflik Family and 26 episodes of the newest production Babies and the Bear. Both productions were directed by Marek Skrobecki, co-creator of such productions as the Oscar-winning Peter and the Wolf or Danny Boy.
A professional crew of nearly 50 members works on the production, which allows to carry out the whole process of animation creation - from screenplay to post-production - in one place.
Every year, the Studio’s productions win nominations and prizes at prestigious animated film festivals, such as San Diego International Kids Film Festival or Annecy International Animation Film Festival. 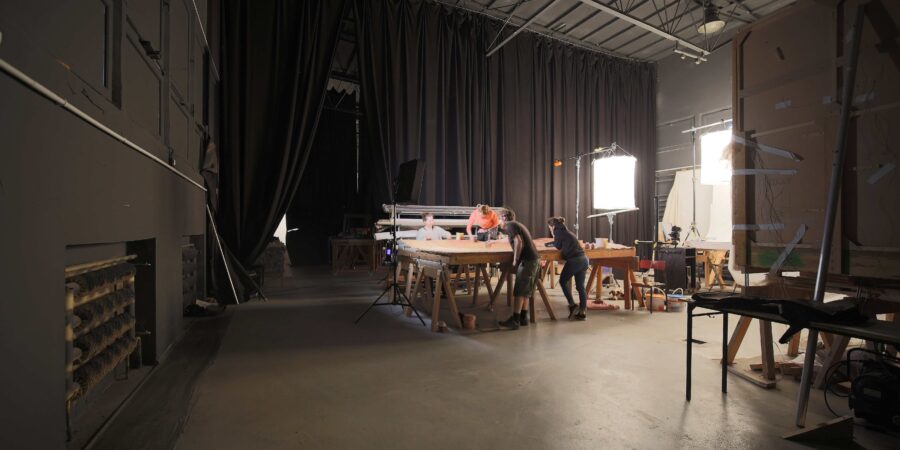 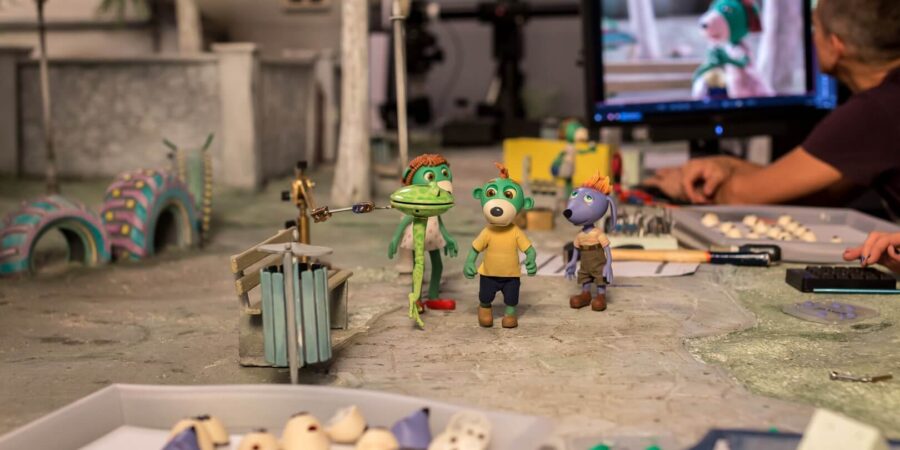 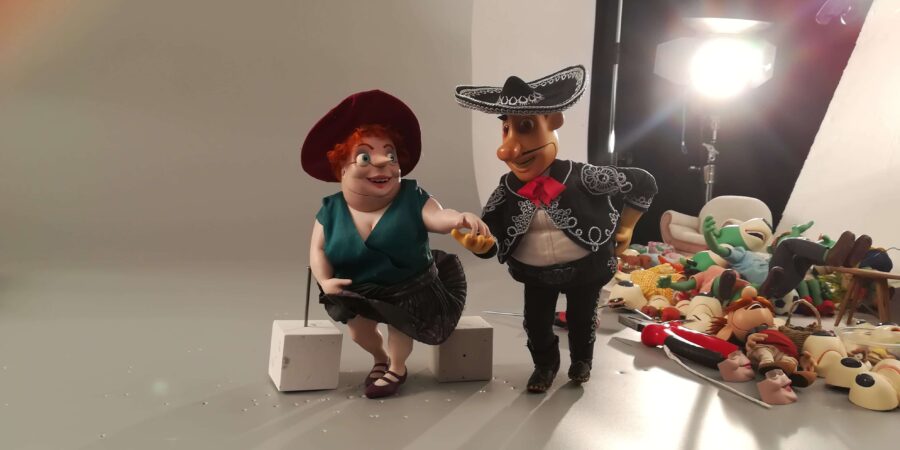